Zuckerberg Plans To Wiretap Whatsapp. He'll Do The Same To Libra 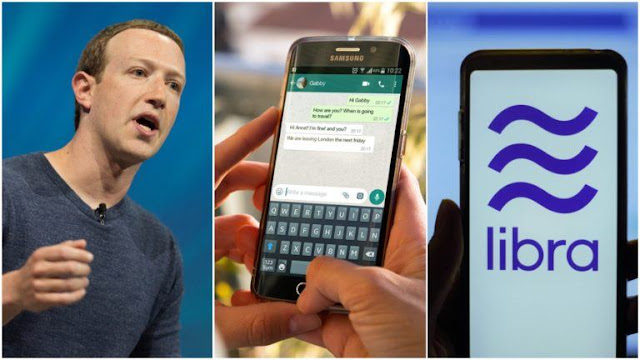 Mark Zuckerberg's Facebook is reportedly working on a back-door content-scanner for WhatsApp, tantamount to a wiretapping algorithm. If the reports are correct, Facebook will scan your messages before you send them and report anything suspicious.

Facebook will do the same thing with its new currency, Libra, scanning transactions through the Calibra wallet. Facebook is building a mass-surveillance currency and we should push back with force.

“Facebook announced earlier this year preliminary results from its efforts to move a global mass surveillance infrastructure directly onto users’ devices where it can bypass the protections of end-to-end encryption.” https://t.co/uj5czJUgBA
— Paul Shetler (@paul_shetler) July 28, 2019

According to a Forbes report, Facebook is experimenting with a blacklist filter and content-scanner for WhatsApp. The algorithm would read messages before they are sent and detect suspicious activity.


“[It] will include embedded content moderation and blacklist filtering algorithms… will run locally on the user’s device, scanning each cleartext message before it is sent and each encrypted message after it is decrypted.”

If anything suspicious is found, your message will be sent to Facebook central servers for further investigation.


“When it detects violations it will need to quietly stream a copy of the formerly encrypted content back to its central servers to analyze further, even if the user objects, acting as true wiretapping service.”

Those same back-doors are being built into Facebook’s cryptocurrency wallet, Calibra.

According to Calibra’s own terms and conditions, the wallet provider will send transaction data back to Facebook in various circumstances:


“The limited cases where [account information or financial data] may be shared reflect our need to keep people safe, comply with the law, and provide basic functionality to the people who use Calibra.”

In other words, there’s a back-door for Calibra to send information to Facebook if there’s suspicious activity or if the government demands it.

12/ What’s interesting about these examples is the hint that the wallet could have access to Level 3 transactional level data, or visibility into not just where and how much you purchased, but also an itemized receipt of the items that you purchased at a specific merchant...
— Ryan Todd (@_RJTodd) June 19, 2019

ZUCKERBERG MAY BLACKLIST PEOPLE FROM LIBRA

When Libra’s project lead David Marcus was grilled in Congress earlier this month, he was unable to answer a question on censorship. Wisconsin senator Sean Duffy asked whether alt-right personalities who have been banned from Facebook could use Libra:


“With regard to your network, can Milo Yiannopoulos or Louis Farrakhan use Libra?”

There’s a strong chance Facebook could blacklist users or transactions.

Despite Facebook’s promise to evolve into a fully permissionless, decentralized system, there are huge question marks over Facebook’s control of the ecosystem.

WILL LIBRA EVEN LAUNCH?

Regulators are bearing down on Facebook, threatening to quash the project before it gets going. In the company’s latest quarterly report, Zuckerberg admitted the Libra project could be severely delayed and may not even launch at all.


“In addition, market acceptance of such currency is subject to significant uncertainty. As such, there can be no assurance that Libra or our associated products and services will be made available in a timely manner, or at all.”

Libra has faced pushback from the president of the United States, the chairman of the Federal Reserve, and the Treasury Secretary, not to mention hundreds of Congress members.