No Comments
In the US, it's cheaper to build and operate wind farms than buy fossil fuels. 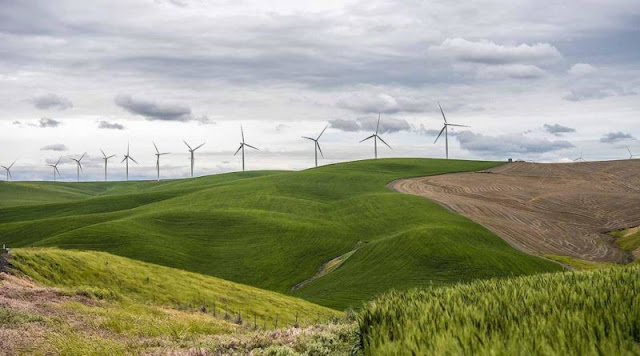 This week, the US Department of Energy released a report that looks back on the state of wind power in the US by running the numbers on 2018. The analysis shows that wind hardware prices are dropping, even as new turbine designs are increasing the typical power generated by each turbine. As a result, recent wind farms have gotten so cheap that you can build and operate them for less than the expected cost of buying fuel for an equivalent natural gas plant.

Wind is even cheaper at the moment because of a tax credit given to renewable energy generation. But that credit is in the process of fading out, leading to long-term uncertainty in a power market where demand is generally stable or dropping.

A lot of GigaWatts

2018 saw about 7.6 GigaWatts of new wind capacity added to the grid, accounting for just over 20% of the US' capacity additions. This puts it in third place behind natural gas and solar power. That's less impressive than it might sound, however, given that things like coal and nuclear are essentially at a standstill. Because the best winds aren't evenly distributed in the US, there are areas, like parts of the Great Plains, where wind installations were more than half of the new power capacity installed.

Overall, that brings the US' installed capacity up to nearly 100GW. That leaves only China ahead of the US, although the gap is substantial with China having more than double the US' installed capacity. It still leaves wind supplying only 6.5% of the US' total electricity in 2018, though, which places it behind a dozen other countries. Four of them—Denmark, Germany, Ireland, and Portugal—get over 20% of their total electric needs supplied by wind, with Denmark at over 40%.

That figure is notable, as having over 30% of your power supplied by an intermittent source is a challenge for many existing grids. But there are a number of states that have now cleared the 30% threshold: Kansas, Iowa, and Oklahoma, with the two Dakotas not far behind. The Southwest Power Pool, which serves two of those states plus wind giant Texas, is currently getting a quarter of its electricity from wind. (Texas leads the US with 25GW of installed wind capacity.) 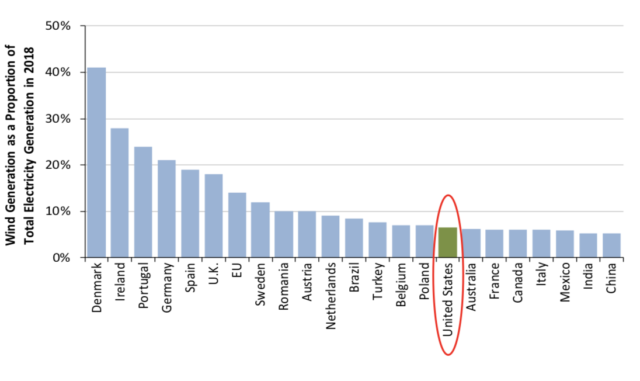 Despite having a lot of wind installed, the US uses far more power from other sources.

So while wind remains a small factor in the total electricity market in the US, there are parts of the country where it's a major factor in the generating mix. And, given the prices, those parts are likely to expand.

In the US, the prices for wind power had risen up until 2009, when power purchase agreements for wind-generated electricity peaked at about $70 per MegaWatt-hour. Since then, there's been a very steady decline, and 2018 saw the national average fall below $20/MW-hr for the first time. Again, there's regional variation with the Great Plains seeing the lowest prices, in some cases reaching the mid-teens.

That puts wind in an incredibly competitive position. The report uses an estimate of future natural gas prices that show an extremely gradual rise of about $10/MW-hr out to 2050. But natural gas—on its own, without considering the cost of a plant to burn it for electricity—is already over $20/MW-hr. That means wind sited in the center of the US is already cheaper than fueling a natural gas plant, and wind sited elsewhere is roughly equal. 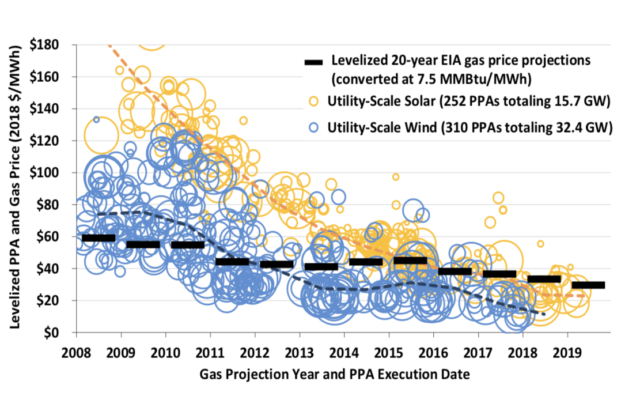 Those black bars are the price of gas. Blue circles are wind, while yellow are solar.

The report notes that photovoltaics have reached prices that are roughly equivalent to wind, but those got there from a starting point of about $150/MW-hr in 2009. Thus, unless natural gas prices reverse the expected trend and get cheaper, wind and solar will remain the cheapest sources of new electricity in the US.

The levelized cost of electricity, which eliminates the impact of incentives and subsidies on the final prices, places wind below $40/MW-hr in 2018. The cheapest form of natural gas generation was roughly $10 more per MegaWatt-hour. Note that, as recently as 2015, the US' Energy Information Agency was predicting that wind's levelized cost in 2020 would be $74/MW-hr.

Why has wind gotten much cheaper than expected? Part of it is in improved technology. The report notes that in 2008, there were no turbines installed in the US with rotors above 100 meters in diameter. In 2018, 99% of them were over 100m, and the average size was 116m. In general, the turbine's generator grew in parallel. The average capacity for 2018 installs was 2.4MW, which is up 5% from the year previous.

The area swept by the blades goes up with the square of their length. Thus, even though blade length and rated generating capacity are going up in parallel, the actual potential energy input from the blades is growing much faster. This has the effect of lowering what's called the specific power of the wind turbine. These lower specific power turbines work better in areas where the wind isn't as strong or consistent. On the truly windy days, they'll saturate the ability of the generator to extract power, while on a more typical day when the winds are lighter or erratic, they'll get more out of them.

So even though more turbines are being built at sites without the best wind resources, we're generating more power per turbine. The capacity factor—the amount of power generated relative to the size of the generator—for projects built in the previous four years has now hit 42%, a figure that would once have required offshore wind. That has dragged the capacity factor of the entire US wind industry up to over 35% for the first time last year. 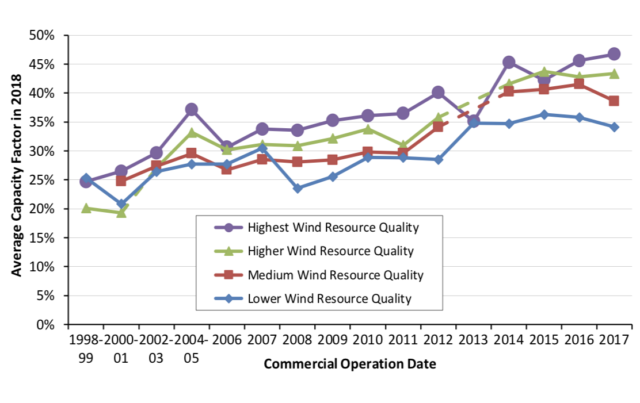 Each year, the capacity factor of newly installed projects is typically higher than that of the years prior.

The economics of these low-wind designs are so good that 23 existing sites were "repowered," with new, larger rotors replacing older hardware on existing towers. One thing that may be encouraging this is that older plants (those a decade old or more) seem to see a small dip in capacity factor over time. But the reason for this isn't clear at this point, so it's something that will have to be tracked in the future.

Better grid management also helped the economics of wind. At times, strong winds can cause wind farms to produce an excess of power relative to demand, causing a farm's output to be reduced. This process, called curtailment, remained a small factor, with only 2% of the potential generation lost this way. Put differently, if the curtailed electricity had been used, it would have only raised the average capacity factor by 0.7 percentage points.

Overall, given these economics, it's clear that the economic case for wind energy will remain solid as the tax credits for the construction of renewable energy fade out over the next few years. But the vanishing credits are causing lots of developers to start projects sooner rather than later, so we may see a bubble in construction for the next couple of years, followed by a dramatic drop off.