No Comments
The proposed vessel would ply polar waters, but scientists have their doubts about its effectiveness.
Image: Submarines can rebuild an iceberg block by block.

From building floating cities and towering sea walls to erecting snow cannons in Antarctica to help replenish melting polar ice, scientists and urban planners have proposed all sorts of schemes to defend against rising seas — one of the most worrisome consequences of climate change.

Now, designers in Indonesia have offered up what may be the most audacious plan yet: they propose building ice-making submarines that would ply polar waters and pop out icebergs to replace melting floes.

“Sea level rise due to melting ice should not only be responded [to] with defensive solutions,” the designers of the submersible iceberg factory said in an animated video describing the vessel, which took second place in a recent design competition held by the Association of Siamese Architects.

The video shows the proposed submarine dipping slowly beneath the ocean surface to allow seawater to fill its large hexagonal well. When the vessel surfaces, an onboard desalination system removes the salt from the water and a “giant freezing machine” and chilly ambient temperatures freeze the fresh water to create the six-sided bergs. These float away when the vessel resubmerges and starts the process all over again.

A fleet of the ice-making subs, operating continuously, could create enough of the 25-meter-wide “ice babies” to make a larger ice sheet, according to the designers. Faris Rajak Kotahatuhaha, an architect in Jakarta and the leader of the project, said he sees the design as a complement to ongoing efforts to curb emissions. 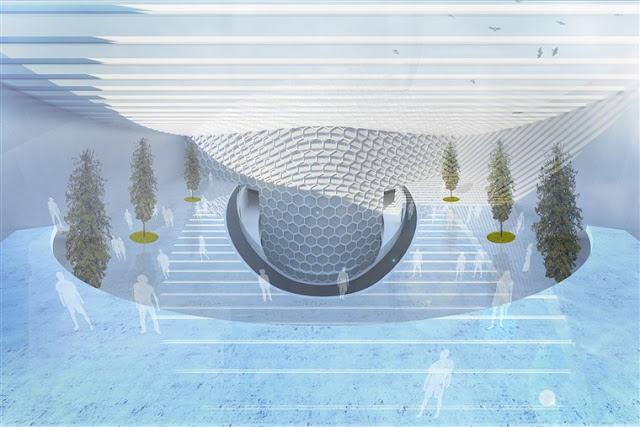 Artist's rendering shows the scale of the submarine's interior, which the designers say could be used as an office space or laboratory.  Faris Rajak Kotahatuhaha, Denny Lesmana Budi, Fiera Alifa

Experts praised the designers' vision but cast doubt on the project's feasibility.

“It’s like trying to save the sand castle you built at the beach using a dixie cup as the tide comes in,” Michael Mann, a professor of atmospheric sciences at Penn State, said of the iceberg-making proposal.

Mark Serreze, director of the University of Colorado’s National Snow and Ice Data Center in Boulder, offered a similar assessment. He called the project “very interesting” but said it raised more questions than it answered.

“What are you going to do, put out a flotilla of 10,000 submarines?” he said. “Who’s going to build them and how much energy does it take, and how are the submarines powered?” And unless they’re powered by wind or another clean energy source, he added, the submarines would need to burn fossil fuels, releasing even more planet-warming greenhouse gases into the air.

If the icebergs were big enough, they might help curb sea level rise indirectly by reflecting more of the solar radiation that raises global temperatures. But Serreze said creating the bergs wouldn’t lower sea levels directly if they remained in the water; they'd have to wind up on land to reduce the volume of the oceans.

More important, Serreze said, rebuilding sea ice would do nothing to address the greenhouse gas emissions that are the root cause of climate change. “It’s simply a Band-Aid,” he said of the ice-making vessel idea.