Something Big Just Slammed Into Jupiter 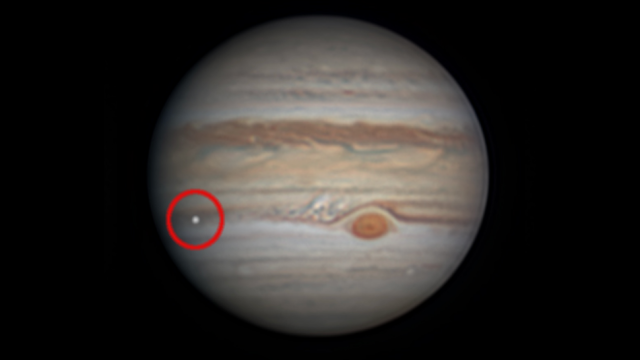 An amateur astronomer in Texas captured a rare sight earlier this week when an apparent meteor slammed into Jupiter’s thick upper atmosphere.

On Wednesday, amateur astronomer Ethan Chappel was on the lookout for Perseid meteors, reports ScienceAlert. But his telescope was trained on Jupiter with the camera running. Later, after feeding the data into a software program designed to detect impact flashes, Chappel was alerted to the event.

Looking at the footage, Chappel saw a brief but discernible flash along the western portion of Jupiter’s Southern Equatorial Belt, or SEB.

Later that day, Chappel announced his discovery in a tweet: “Imaged Jupiter tonight. Looks awfully like an impact flash in the SEB.” Chappel released a sharper version of the impact on Thursday, along with a colorized view of the apparent impact.

Two views of #Jupiter early on 7 August 2019 with the flash I recorded. Left shows the moment of impact at 4:07 UTC. Right is an RGB image. pic.twitter.com/xPmS8MMFhc
— Chappel Astro (@ChappelAstro) August 8, 2019

The flash appeared at at 4:07 a.m. UTC (12:07 a.m. ET) and lasted no longer than a second and a half, said astronomer Bob King in his coverage at Sky & Telescope. The impact still needs to be confirmed by other astronomers, but it certainly bears the hallmarks of a meteor strike, and not something that might be produced by Jupiter’s lightning flashes or auroras.

“It expanded from a pinpoint to a small dot before fading away—telltale signs of a possible impact based on previous events observed at Jupiter,” noted King.

Looking at the flash, the size of the explosion seems small, but it’s important to remember that Jupiter is the largest planet in the solar system. The meteor had to have been quite big to produce a flash of such prominence.

In a tweet, astronomer Heidi Hammel, a scientist working on the James Webb Space Telescope and a board director at the Planetary Society, said the impact won’t likely “leave dark debris like SL9 [Shoemaker-Levy 9] did 25 years ago.” In July 1994, Hammel was on the Hubble team that chronicled this momentous event, when 21 cometary fragments of Shoemaker-Levy 9 slammed into Jupiter over the course of several days. The collisions created a dramatic, albeit temporary, atmospheric scar.

We asked Hammel why this impact is unlikely to leave a smudge.

“In 2010, a flash on Jupiter with a somewhat similar brightness was spotted, and we so looked at Jupiter with both NASA’s Hubble and NSF’s Gemini telescope, and another team looked with ESO’s VLT,” Hammel told Gizmodo. “We saw no impact site. Bottom line: from an analysis of the brightness and duration of the 2010 flash, we can infer the impact energy, and [discern] when such bolides are likely to create detectable effects.”

To which she added: “My tweet was based on my visual inspection of the recent video, compared with my knowledge of past Jupiter bolide impacts since 2010,” including a similar impact in 2012.

Analysis of the 2010 impact estimated the size of the bolide at between 8 and 13 meters (26-43 feet) in diameter, which released around 4 quadrillion Joules of energy, or roughly 1 megaton of TNT. By comparison, the atomic bomb dropped on Hiroshima was 15 kilotons.

Yesterday, Hammel emailed with Ricardo Hueso Alonso, an astronomer at Universidad del País Vasco in Spain, who confirmed her preliminary visual assessment. Based on his own evaluation of Chappel’s new video, he wrote: “From an energy point of view the flash did not saturate the [telescope] detector and seems smaller than the impact in 2012 and similar to the one in 2010.”

Writing in his Sky & Telescope post, King said any scar left behind from the August 7 impact would be blown westward due to Jupiter’s prevailing winds.

“When I learned of the news yesterday evening, I immediately set up my 10-inch Dob [telescope] for a look, but I was unable to make out any dark scar such as those left in the wake of previous Jupiter strikes,” wrote King. “Several other observers with better skies and much better cameras have similarly recorded nothing obvious at the site since the impact, but that could change. That’s why it would be wise for all amateurs to monitor the site to look for an impact scar or changes in Jovian cloud patterns.”

Since 1994, astronomers have recorded an additional seven impacts on Jupiter, according to King, though nothing quite on the scale of Shoemaker-Levy 9. That said, Jupiter is pounded by meteors on a regular basis—somewhere between 2,000 to 8,000 times the rate of impacts experienced on Earth, reports ScienceAlert. Unlike the impact on August 7, however, the vast majority of these impacts are too small to detect from Earth.

Hopefully confirmation of this latest impact will come soon, along with more details about what must have been a truly large object.