No Comments
A McDonald's worker has been fired after allegedly refusing to serve a paramedics wearing full uniform because staff "don't serve badges."

Sunstar paramedic Anthony Quinn said the fast food worker in Madeira Beach, Florida, refused to serve him and his colleague after telling both of them that "we don't serve your kind here."

Quinn discussed the incident in a post on Facebook. "I walk into McDonald's just to use the bathroom and an employee goes we don't accept officers in here," he wrote.

"I tell her I'm not an officer. She then says anyone with a badge. Then says it to my partner as he walks in to order food, says we don't serve your kind here.

Caspers, the company which runs the Madeira Beach McDonald's, apologized to the paramedic for the employee's actions and said they have since been fired.

"We are aware of the unfortunate incident that took place at one of our restaurants last night. We, like you, were upset and disappointed and took immediate action," a spokesperson told ABC Action News.

"The employee has been terminated. What occurred does not reflect the values of our brand, our franchise, or the love and admiration we have demonstrated consistently for our friends in law enforcement and first responders. We have reached out to offer our sincerest apology."

The company also confirmed to WTSP that the employee was "no longer with the organization."

Last year, two police officers claimed they were mocked and refused service while attempting to order food at a Burger King in Louisiana.

Two Assumption Parish sheriff's deputies wearing full uniform said workers jokingly told them they restaurant was completely out of food while they were trying to order through the drive-thru speaker.

"They sat there for an extended period of time before someone finally let them order," the department's public information officer, Lonny Cavalier, wrote in the Blue Lives Matter blog.

"[One officer] could hear them inside laughing, but no one would come to the window."

"I have investigated the incident and have determined that certain team members refused service to multiple guests in our drive thru, including the two deputies, on that day. As a result, these individuals no longer work for our organization." 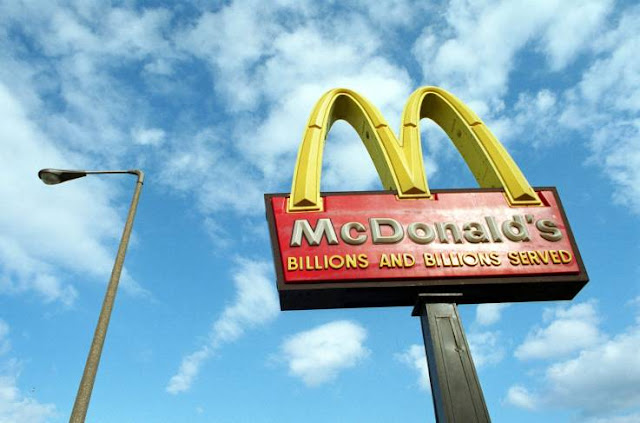 McDonald's famous golden arches catches sunlight March 14, 2001 at one of it's chain restaurants in Boston MA