No Comments
A new study reveals evidence of a large number of mutations in important Komodo genes. 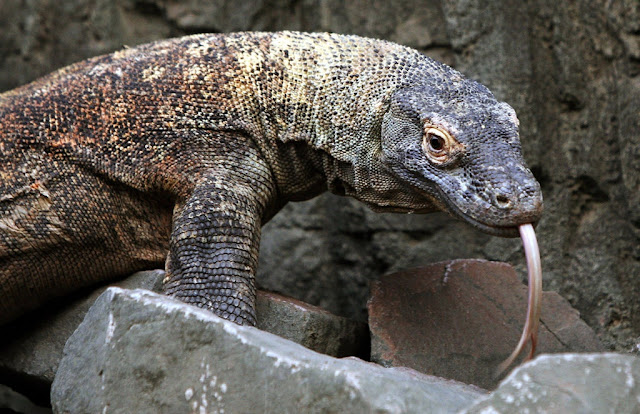 The saliva of Komodo dragons contains anticoagulants that can cause their prey to bleed out when they bite them.  Andrew Yates/Agence France-Presse — Getty Images

Komodo dragons are the largest lizards on the planet, with some adults measured at more than 350 pounds and longer than 10 feet. They detect their prey, including deer and water buffalo, from miles away with an exquisite sense of smell, and at close range, they race at terrifying speeds. Even a single bite can be enough to seal the prey’s fate, because a dragon’s saliva contains potent anticoagulants: Once the bleeding starts, it doesn’t stop.

But when Komodo dragons bite each other, which they do with some frequency, they do not bleed out the way their prey do. That suggests that at some point, they evolved a resistance to their own anticoagulants.

It’s one example of the odd batch of traits that have fascinated scientists, including Katherine Pollard, an epidemiologist and biostatistician at the University of California, San Francisco, as well as a researcher at the Gladstone Institutes. She wondered what the Komodo dragons’ genome would reveal about their biology and evolution.

In a paper published last week in Nature Ecology and Evolution, she and her colleagues present the lizards’ genome, revealing evidence of a large number of mutations in important Komodo genes. Their analysis offers insights into the dragons’ blood, senses and other unique aspects of their anatomy.

The group cobbled together a draft genome from two dragons living at Zoo Atlanta some years ago, and used tissue from a dragon in the Prague National Zoo to flesh it out. But more recently, Abigail Lind, a postdoctoral fellow in Dr. Pollard’s lab, focused on the process of interpreting the genome. Using algorithms that helped parse which parts of the sequence coded for proteins, Dr. Lind identified more than 18,000 genes. With the help of other lizard genomes, the researchers made predictions about the genes’ roles.

“We wanted to particularly look at different unique traits,” Dr. Pollard said. “The most obvious one is they are gigantic. But there are some other really cool things about them.”

To look for Komodo genes that had undergone concerted evolution, the researchers pinpointed about 200 with a particularly large number of mutations compared to related species. This pattern suggested that natural selection had favored alterations to those genes, honing them into a form that is specific to the dragons.

Many such changes were related to mitochondria, the cellular structures responsible for generating energy. That implied that the dragons may have modified mitochondria to support their sudden bursts of speed.

Others represented a family of sensory receptors that have blossomed in number in the dragons, perhaps linked to their uncanny sniffing abilities.

Still others encoded numerous proteins involved in blood clotting, suggesting that the dragons may have special genes that allow them to survive their own saliva.

Additional lab experiments would be required to test how the dragons’ proteins actually work and how their modifications may enable their special abilities. For instance, Dr. Pollard is interested in mixing dragon saliva and blood together in a dish to see what happens. That may take a while, however.

“They don’t really want to give up bodily fluids,” she said of the dragons, unless they are anesthetized.

Surprisingly, the researchers found no particular insights into the lizards’ giant size. There were no obvious changes to genes involved in development and growth, as you might expect if there had been positive selection encouraging their growth.

One alternate hypothesis is that enormous size may be an ancestral trait among lizards, and tiny lizards are a more recent development. Perhaps the Komodos are the normal ones, Dr. Pollard speculated, and everyone else, through the eons, has changed.