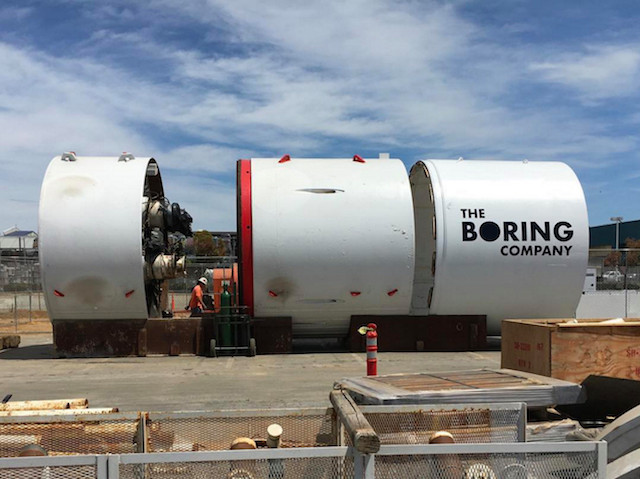 Elon Musk  wants to drill holes in China. The Tesla founder has tweeted to reveal that his tunnelling and transportation startup, The Boring Company, will be launch in China later this month.

Musk is due to speak at an AI conference, called the World Artificial Intelligence Conference, taking place in Shanghai on August 29-31. Replying to a tweet about the event he announced: “Will also be launching The Boring Company  China on this trip.”

Another Twitter user chipped into the conversation to ask whether the company would also do underwater tunnels — to which Musk replied simply “yes“.

A securities filing last month revealed that the The Boring Company had raised its first outside investment via the sale of $120M in stock. So the company has some extra cash sloshing around to plough into new ventures.

This underground ‘people mover’ is not, as you might imagine, a tried and tested metro train system. The plan apparently involves building two tunnels: One for vehicles (Musk does also sell electrics cars) and a second tunnel for pedestrians who will be carried in (modified) Tesla cars. The latter fully autonomous, under the plan.

Current generation Teslas are not capable of driving themselves, merely offering driving assistance features to humans. But autonomous driving inside a tunnel is about as much of a controlled environment you could hope for — without, y’know, sticking cars together on rails and making a driverless train (like the one that’s been serving London’s Docklands area since 1987).

The Las Vegas contract specifies three months of safety testing before Musk’s modified Teslas will be allowed to whisk people through the tunnel.

Another design that The Boring Company has proposed — for an ambitious Loop system from Washington, D.C. to Baltimore — is still on the drawing board, having attracted major safety concerns by failing to meet several key national safety standards, including lacking sufficient emergency exits and not taking note of the latest engineering practices.

So perhaps, in looking to expand The Boring Company by taking his spade to the Far East, Musk is hoping for a more accommodating set of building standards to drive an electric truck through.