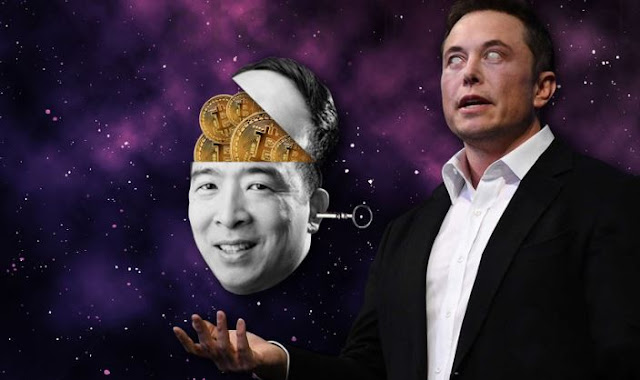 Elon Musk, one of the most successful entrepreneurs around the world and CEO of Tesla, gave his support to the Presidental candidate Andrew Yang. Mr. Musk shared his opinion about Yang on Twitter when he answered a comment made by the Twitter handle @HardcoreHistory. Andrew Yang is known for being a Bitcoin (BTC) supporter.

A few days ago, the American political commentator and podcaster Dan Carlin (with the handle @HardcoreHistory) shared a tweet of Andrew Yang. The presidential candidate wrote in this tweet that he does not expect to agree with everyone but he is open to different approaches to face different challenges and solve problems.

I don’t expect people to agree with me on everything- that would be odd. My main hope is that people trust that I’m trying to solve problems and I’m open to different approaches - particularly if the data drives in a particular direction. Changing one’s mind is not a bad thing.
— Andrew Yang (@AndrewYang) August 10, 2019

Elon Musk answered to Carlin’s comment saying that he supports Yang. Yang is a candidate that has many times shown support for Bitcoin and the cryptocurrency market. The Democratic candidate is also a proponent of a universal basic income and he accepts campaign donations in Bitcoin and other digital assets.

The political action committee (PAC) Humanity Forward Fund has also joined forces with Opennode to raise funds from individuals and firm and back Yang’s presidential campaign.

The main proposal he is currently doing is to implement a universal basic income for all Americans aged over 18. These citizens will receive $1,000 per month independently of their employment situation.

How weird that this should be a somewhat novel thing to say. https://t.co/KrClbraCbu
— Dan Carlin (@HardcoreHistory) August 10, 2019

Yang has to also debate for the next debate scheduled for September 12 this year. He will have to discuss different proposals with other candidates, including Joe Biden, Bernie Sanders, Elizabeth Warren, Kamala Harris, Pete Buttigieg, Beto O’Rourke, Cory Booker and Amy Klobuchar.

Immediately after the tweet written by Elon Musk, Andrew Yang answered saying that his support “means a great deal.” He has also congratulated Musk for building the future.

As mentioned before, Elon Musk founded SpaceX and The Boring Company, co-founded Tesla, Neuralink, OpenAI and PayPal. Moreover, he has also been ranked 21st on the Forbes list of The World’s Most Powerful People.

In the United States, there are yet not clear regulations related to the cryptocurrency market and virtual currencies in general. There have been many companies that had issues to operate in the U.S. because they couldn’t deal with the local regulations.

Another presidential candidate that is in favour of digital assets and Bitcoin is John McAfee. Although he is not running with any of the traditional parties, he received a lot of attention due to the different proposals he made.