The seamstresses who helped put a man on the moon

Even for the people who actually did it, the idea of walking on the moon is still a little hard to comprehend. In 1972, Harrison "Jack" Sschmitt of Apollo 17 became the last man to set foot on the moon.
"Any time you felt a little bit homesick you could just look up and see the Earth hanging over the South Massif. So, it was really a spectacular place to be," said Schmitt.
"That's remarkable, looking up and seeing the Earth," said correspondent Tracy Smith.
"Oh, it's only 250,000 miles away. That's home!"
"You're one of 12 people ever who stood on the moon. Can you get your head around that?"
"Not really," Schmitt said. "I was honored and privileged to be part of the Apollo program. But like everyone else who was part [of] Apollo program, we happened to be at the right place at the right time with an extraordinarily strong motivation to succeed."
And they were motivated, from the astronauts waving goodbye on their way to the history books, to the chain-smoking guys in Mission Control. But back in places where the TV cameras didn't always go, a small army of women was working just as hard at jobs that were just as important.
How the astronauts' spacesuits were made is a story in itself. Before man could take a giant leap, they needed to solve a few giant problems: In the vacuum of space, without the right spacesuit, an astronaut could blow up like a balloon, or burn up, or maybe get drilled by a micro-meteorite.
When NASA needed a new moon suit, big government contractors, like Litton Industries and Hamilton Standard, made stiff, bulky spacesuit prototypes that often looked like a cross between Sir Galahad and Buzz Lightyear.

What NASA needed was something more flexible, and they found out that no one knew flexible like the people who made Playtex girdles and bras.
Playtex, also known as the International Latex Corporation (ILC), of Dover, Delaware, wasn't nearly as big as the other suit makers, but they had some pretty radical ideas.
In 1967 ILC came up with a softer, more flexible spacesuit made almost entirely of fabric, and then shot film at a local high school with an employee putting the suit through its paces on the football field. 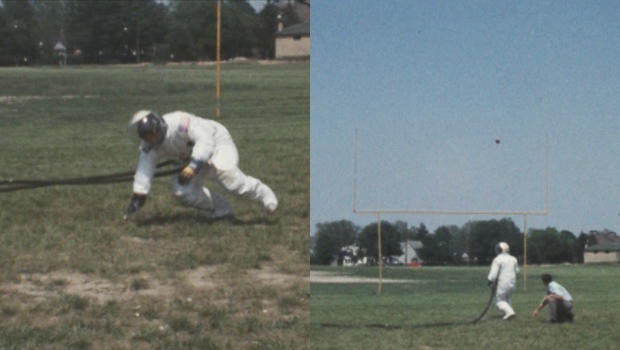 In the end, the company won the contract for the Apollo suits, and gave some of their bra-making seamstresses a brand-new assignment.
Smith asked Anna Lee Minner, one of the women who made the suits that went to the moon, if she was told they would be making spacesuits. "They didn't tell me a thing," she replied. "They just brought me up here."
"So, from bras and girdles to spacesuits?"
"Little pieces like this, to big pieces like this," Minner said.
Women, it turns out, had the perfect touch, according to ILC project manager Homer Riehm. "The people that sewed the suits were all women, that's correct," he said.
And the reason? "Agility."
And it took plenty of agility: Each suit was comprised of 21 layers of gossamer-thin fabric, sewn to a precise tolerance of 1/64th of an inch on a sewing machine your grandmother might've used.
Reihm said, "We were interested in accuracy."
In other words, there was no room for any mistakes.
Minner said, "I went home on many a night and cried because I knew I couldn't do it. I was scared. this was a person's life this depended on."

In fact, they never forgot that their work could be the difference between victory and tragedy. The women at ILC took their job very seriously. "They may have had the most important job of all, frankly," said Basil Hero, author of the Apollo account, "The Mission of a Lifetime." "As Neil Armstrong said, 'Those space suits were mini spacecraft.' You were one pin prick away from death. If those suits failed, that was it. You were done."
So, the women put their hearts into it. Lillie Elliott, who cut the patterns, said at first she didn't quite comprehend the responsibility of their sewing: "But later on, you know, when you had all these inspections going on, it kind of clicked in your head, you know, I gotta do this right."

And then the job got even tougher.
In January 1967, during a test, a spark in the Apollo 1 capsule's pure oxygen atmosphere triggered an inferno from which there was no escape for astronauts Gus Grissom, Ed White and Roger Chaffee.
In the months that followed, NASA engineers put their grief aside and made the spacecraft safer. ILC also revamped the suits to take out anything that could burn.
And the inspections there could be brutal: if one of the women left so much as a stray pin in the finished suit, there'd be hell to pay.
Smith asked, "So, if you had a pin in your spacesuit, what happened?"
"You got stuck with it!" said Ruth Anna Ratledge.
"I guess you learn your lesson that way."
"Thank God it wasn't me!" she laughed.
The astronauts themselves were familiar faces as their suits were made, both in person for fittings, and on the signed face cards that hung from every suit – a reminder that the astronauts were betting their lives on the skilled hands of ILC.
Seamstress Joanna Thompson said, "We would have astronauts come in and thank us, and that was a real boost. It made a connection there that you didn't forget."
And on July 20, 1969, when the big moment finally arrived, the women of International Latex held their breath. Lillie Elliott recalled, "Once they started down the ladder, and he put his foot on the moon, that was a pinnacle of watching something that you've helped do."
Smith asked, "Where was your heart in that moment?"
"In my throat!" Elliott replied.
"Was there an inner dialog going on, a voice in your head?"
Elliott said, "Oh my, 'I wonder if that's gonna hold? Oh my, I wonder if this gonna be all right. I hope that stitch didn't pop!'"
Watching from Mission Control, Homer Riehm just wanted it to be over, especially when Buzz Aldrin turned a moonwalk into a moon sprint: "And I'm sayin' to myself, 'Corral that guy. Lock him up and get him up the ladder. It's a success. Let's declare a success and go inside! I wanted Buzz Aldrin to stop runnin' around and get up the ladder!"
In fact, none of the spacesuits failed, not once, on the first moon mission, or the last.
Harrison Schmitt recalled how every once in while, while moving about on the moon, he'd lapse into song. "I was having a great time!" he said.
Smith asked, "Were you able to enjoy yourself?"
"I really did, the whole time I was up there."

Schmitt, who turned 84 this month, still loves sharing his lunar experience. And some of the ladies who sewed his suit would like back in, too. "We enjoyed every bit of it, every stitch. I would do it all over again if I could," said Ruth Anna Ratledge.
"You'd still like to be doin' it?" asked Smith
"Yes," she laughed. "I loved it."
Joanne Thompson added, "Wow, I'm still amazed, it was great!"
They're all retired now, but ILC is still making spacesuits … and who knows?  An ILC suit might one day go to Mars.