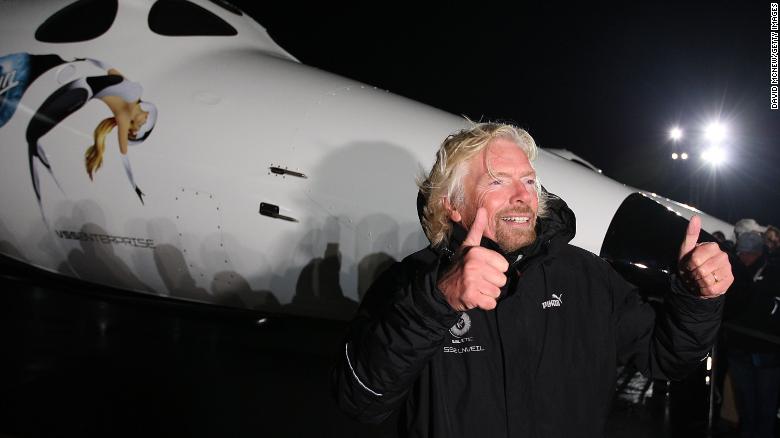 Richard Branson is bringing Virgin Galactic to the stock market.
The billionaire's space tourism venture said Tuesday that it will go public as part of a deal that will see new investors take a 49% stake.
Virgin Galactic will merge with Social Capital Hedosophia (IPOA), a company formed by two venture capital firms that trades on the New York Stock Exchange. The deal is expected to close in the second half of this year, and the value of the combined companies will be roughly $1.5 billion.
Galactic will become the "first and only publicly traded commercial human spaceflight company," SCH and Galactic said in a statement.
The startup's current management team will stay in place after the merger, and, as part of the deal, existing investors in Galactic are being offered a combination of SCH stock and cash. Galactic's primary backers are Branson and his own Virgin Group, a UK-based investment and branding company that functions like his private wealth management firm.
SCH's stock was up nearly 3% on Tuesday.

Galactic has yet to fly a mission for paying customers, but the startup has notched two successful demonstration flights of its rocket-powered space plane, called SpaceShipTwo, to more than 50 miles above Earth. Those test flights in December and February closely mimicked the flight path its commercial missions will take. The plane is designed to carry two pilots and up to six passengers.
Branson is expected to be among the first passengers aboard a SpaceShipTwo flight. The company plans to start flying customers in the first half of 2020, according to a public filing published Tuesday.
About 600 people are lined up to take the short, high-speed trip aboard a Virgin Galactic space plane, with most agreeing to pay $200,000 to $250,000 per seat. So far, Galactic's customers have made deposits totaling about $80 million.
Chamath Palihapitiya, the founder and CEO of SCH, told CNN Business' Rachel Crane that he expects Galactic to be profitable by mid-2021.
"It's a business that will be doing almost $600 million of revenue in 2023 and almost 50% profit margins," Palihapitiya told Crane.
As part of Tuesday's announcement, Palihapitiya said he will also personally invest $100 million of his own money in Galactic.
But some analysts have questioned just how big the demand is for commercial space tourism and whether enough of the world's ultra-wealthy will be drawn to the business in order to make it financially sustainable.
For his part, Branson said "demand is enormous," and Galactic expects to become more profitable with each new SpaceShipTwo that it builds.
The SpaceShipTwo that's already flown two missions to space, called VSS Unity, will handle the first commercial missions. Two other space planes are currently under construction at Galactic's facilities in Mojave, California.
Galactic also plans to bring down the price of its tickets eventually, which would potentially open its business to new markets.
Branson told CNN's Crane that he expects the deal with SCH to "speed up the process" of bringing prices down.
"In the short term, [prices are] likely to go up a bit," Branson said. "But in time, the more spaceships we have, the price will start coming down."

Virgin Galactic is expected to compete directly with Blue Origin, the rocket venture founded by Amazon (AMZN)CEO Jeff Bezos. The companies have developed different technologies — but both firms plan to offer minutes-long trips to suborbital space that take passengers high up into the atmosphere before coming back down to Earth.
Blue Origin plans to start flying tourists sometime this year.

Branson told CNN's Crane that there are enough customers to go around in the space tourism market.
"There is so much demand," he said. Bezos will "have his way, we'll have our way. Both will be compelling and hopefully both of us thrive."
As the richest man in the world, Bezos has been able to fund his space venture out of his own pocket since the company was founded in 2000. It's possible Blue Origin can avoid the stock market altogether if the firm continues to feed off Bezos' $122 billion personal fortune.
Branson, meanwhile, has put about $1 billion of his own money into his space ventures. He's funded Galactic through more than a decade as its space plane has undergone developing, building and testing — and that time includes a deadly 2014 crash that hamstrung Galactic for months and led the firm to switch manufacturing partners.
As the company gears up to finally begin commercial flights, it has spent months searching for a new backer. Branson had decided not to take a $1 billion investment from the Saudi government after the murder of Jamal Khashoggi at a Saudi consulate last year.
Palihapitiya, the SCH chief, said partnering with Galactic offers the space venture "a way for him to generate some initial liquidity" and allows the companies "to share the burden" of ramp-up costs.
SpaceX, Elon Musk's rocket venture, and aerospace veteran Boeing could also enter the space tourism market in the near future, but their plans are very different: Both could fly private citizens alongside NASA astronauts on work-related trips to the International Space Station, per an announcement the space agency made last month. Those passengers would pay millions for the opportunity.
SpaceX also has plans to send tourists to the moon — if the company can fully fund development of an ultra-powerful rocket called Starship that's intended for deep-space travel.