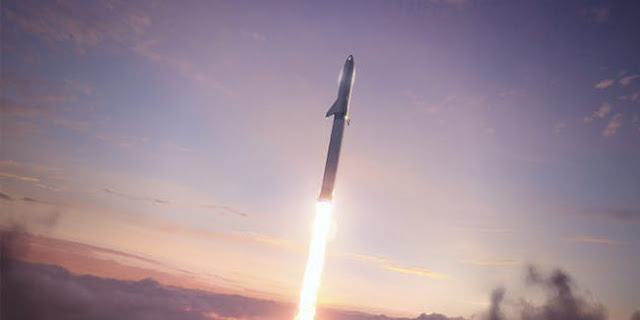 Nuclear thermal rockets would be “a great area of research for NASA,” Elon Musk declared Monday. The SpaceX CEO highlighted how the alternative to rocket fuel could unlock faster travel times around the solar system, a keen area of interest as his firm develops plans to create a planet-hopping civilization.

While the idea may conjure up scenes from Chernobyl, its proponents suggest that astronauts may reduce the amount of radiation exposure endured by astronauts. Deep space already hits travelers with high doses, and while hosting a nuclear reactor on board a spaceship would create its own radiation, that would be outweighed by the reduced time spent on the trip.

Nuclear thermal rocket for fast transit around solar system would be a great area of research for @NASA
— e^👁🥧 (@elonmusk) July 22, 2019

“To be clear: good for in-space transit, but not recommended for Earth to orbit!” Musk stated via Twitter.

Musk was responding to a story from Universal-Sci, which explains how nuclear rockets could reduce the amount of time it takes to get to Mars from eight months down to just 100 days.

SpaceX is currently developing the stainless steel Starship, fueled with liquid oxygen and methane, with the goal of a manned mission to Mars. The rocket’s fuel means humans can set up a propellant depot that creates more fuel on the surface of Mars, enabling a return flight home and trips even further out in space. Musk has suggested that SpaceX could establish a full-blown city on Mars by 2050 — a goal that nuclear rockets could speed up even more. 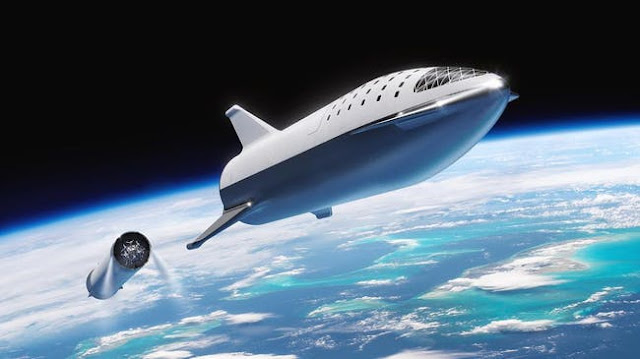 Concept art for the Starship.

Nuclear Rockets: How a Reactor Could Send Astronauts Soaring

Today’s chemical-based rockets basically work by setting fire to the fuel and pushing the exhaust through a nozzle, creating thrust that gets the rocket lifted up and into space. A nuclear-powered rocket, by contrast, has a reactor on board that heats up a fuel like liquid hydrogen, blasting the propellant through the nozzle at speed.

The reason why nuclear rockets get scientists excited is because they could produce several times more force than traditional rockets, depending on the design.

Specific impulse measures the amount of push that comes from using a set unit of fuel. The Saturn V, the rocket that took humans to the moon, had a specific impulse of 421 seconds on its second-stage boosters. A basic version of a nuclear rocket, by comparison, could reach 900 seconds according to the European Space Agency. More radical designs can reach even higher speeds, like the Orion Drive that essentially detonate a nuclear bomb under the rocket can reach a staggering 100,000 seconds of specific impulse.

NASA has been exploring the concept since the 1960s, when it was working with the Atomic Energy Commission. Indeed, weeks after Neil Armstrong set foot on the moon in 1969, engineer Wernher von Braun was devising a way to use nuclear reactors to get to Mars. The idea would use three nuclear-powered boosters in Earth orbit, joining together with a capsule on top of the central core. Von Braun envisioned the mission taking place in the early 1980s. Unfortunately, in part due to a lack of public support for sending people to an empty wasteland, the Nixon administration axed almost all of von Braun’s plans.

Nuclear rockets again surged to the surface in May 2019, when the House Appropriations Committee approved $125 million in funding to explore nuclear thermal propulsion development. The funds were in addition to another $100 million provided by Congress, around 70 percent of which was aimed for a demonstration flight in 2024. The new funds did not refer to any specific deadline, instead asking for a “multi-year plan.”

On Russia’s side, Roscosmos is also exploring the potential. In November 2018 the agency announced plans to use a nuclear-powered space cruiser to reach Mars:

“Nuclear thermal propulsion (NTP) systems offer the greatest versatility for near-term deep space missions such as NASA’s planned Mars and near-Earth-asteroid missions,” Dan Kotlyar, an assistant professor of nuclear radiological engineering at the Georgia Institute of Technology, told Inverse at the time. “Due to their superior energy density, these systems have nearly twice the efficiency of the best chemical engines paired with comparable thrust levels.”

Starship is about to host its first series of non-tethered hop tests at some point this week. While its Raptor engine has already broken records, it could prove to be a very early iteration of the super-fast rockets that come later.