The company is bringing back a limited number of New Coke cans in honor of the upcoming third season of "Stranger Things," in which the product is featured.

"Stranger Things" creators Ross and Matt Duffers came up with the idea to bring New Coke back as a way to promote the show, which will start streaming on Netflix (NFLX)on July 4. The third season of the show takes place during the summer of 1985 — when Coca-Cola (KO) debuted a new recipe for its iconic beverage.

So-called New Coke was a flop: Consumers reacted so poorly to the new drink that Coca-Cola pulled it from shelves after a few months. New Coke was rebranded as Coke II, and sold in some places after 1985. But this is the first time Coca-Cola is bringing back New Coke with that branding.

Bringing New Coke back is a way for Coca-Cola to "not take ourselves too seriously," Stuart Kronauge, president of Coke's sparkling business unit and senior vice president of marketing for Coca-Cola North America, told CNN Business. And it wasn't easy to recreate the product: Coca-Cola had to reach into its archives to get the design of right, and dig through its vault to recover the recipe.

"Maybe a while ago we wouldn't have done this," Kronauge said. "But we're changing and trying to innovate in ways that are beyond traditional new products. This is a cultural innovation." Coca-Cola recently partnered with Disney Parks & Resorts on custom designs for Coke products being sold at Disney's new "Star Wars" theme park, "Galaxy's Edge." 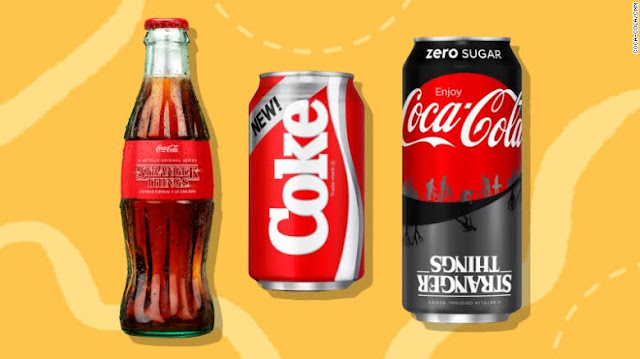 Customers will be able to get New Coke while supplies last starting on Thursday.

The partnership is a way for Coke to reach people in an evolving media landscape.

"Buying a 30-second ad to drop into a certain time-frame is not as valuable as it once was," Kronauge said.

"The world is changing into streaming and non-ad platforms and subscription-based platforms," she added. "So it's important for us to make sure that we are where our consumers' eyeballs and hearts and spirits are." The new promotion is designed to "break the internet" Kronauge said.

There are three ways for customers to get the retro product: As a gift when they buy limited-edition "Stranger Things" Coke and Coke Zero Sugar glass bottles online starting Thursday, through "Stranger Things" themed pop up vending machines that will be in cities this summer, or as a giveaway when they purchase a gift or ticket at the World of Coca-Cola in Atlanta. Coca-Cola has produced under 500,000 of the New Coke 12-ounce cans, and expects to run out quickly.

The company is also selling "Stranger Things" themed cans of regular Coke and Coke Zero Sugar, and is releasing a remake of a 1980s ad featuring characters from the show.

For Netflix, the partnership is a way to advertise in new channels.

"We exist on the internet, and Coke has a century of experience in building consumer products that are physical," Barry Smyth, Head of Global Partner Marketing at Netflix, told CNN Business. The streaming platform is also partnering with a number of other companies, including Lego, H&M, Schwinn and Baskin-Robbins, to promote the upcoming season.
"