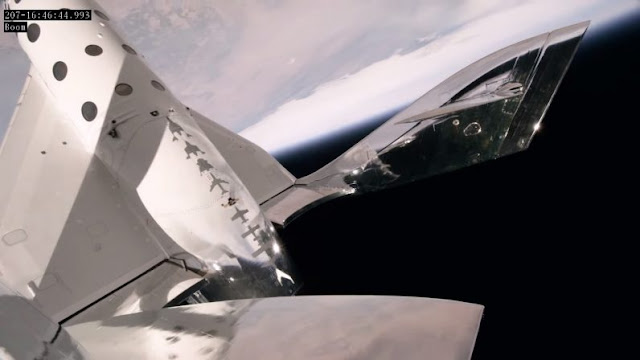 You probably know that Virgin does trains and planes, but did you know the company also does rockets that go to space?

On Friday, the Virgin Galactic SpaceShipTwo made it to space for the second time, soaring at three times the speed of sound and reaching an apogee (max height) of 55.87miles. At this point, the crew experienced the feeling of weightlessness we all imagine in our space dreams.

Prior to this, the spaceship detached from the WhiteKnightTwo 'mothership' at around 45,000 feet, at which point the rocket motor ignited and propelled the crew above the arbitrary 50-mile boundary considered by the US to be the threshold between Earth and space.

After reaching such lofty heights, the spacecraft safely glided back down to Virgin Galactic's space port in California's Mojave desert.


The crew was comprised of Virgin Galactic pilots Dave Mackay and Mike Masucci, who flew the spacecraft, along with working passenger, chief astronaut instructor Beth Moses - the first woman to fly to space aboard a commercial ship.

Virgin Galactic said the flight had almost the amount of weight aboard that would be expected from a full commercial flight.

Richard Branson, Virgin's founder and CEO, hailed the success of the team on Twitter.

He said: "Gutted I couldn't be on the flight line to see @virgingalactic reach space for the second time as I had promised to help organise #VenezuelaAidLive - but a huge congratulations to the team."


The billionaire has previously said that he hopes to fly to space aboard the vessel by summer.

But this isn't just an incredibly rich man's vanity project; rather it is hoped the spacecraft will ultimately be able to take members of the public way beyond Benidorm and all the way into space.

That said, the 90-minute round trip will be priced at around $250,000, so that's the equivalent of a fair few hols to Benidorm.

The face you make when you look back on Earth from space. Our Chief Astronaut Instructor, Beth Moses, is the 571st person to fly to space and the first woman to fly on board a commercial spaceship. pic.twitter.com/lBhK34Burk
— Virgin Galactic (@virgingalactic) February 22, 2019


The spacecraft first made it to space on 13 December, in what was an extremely emotional moment for Branson.

Speaking at the time, the teary entrepreneur told Sky News: "After 14 hard years, to have taken Virgin Galactic into space has been a momentous, historic occasion."