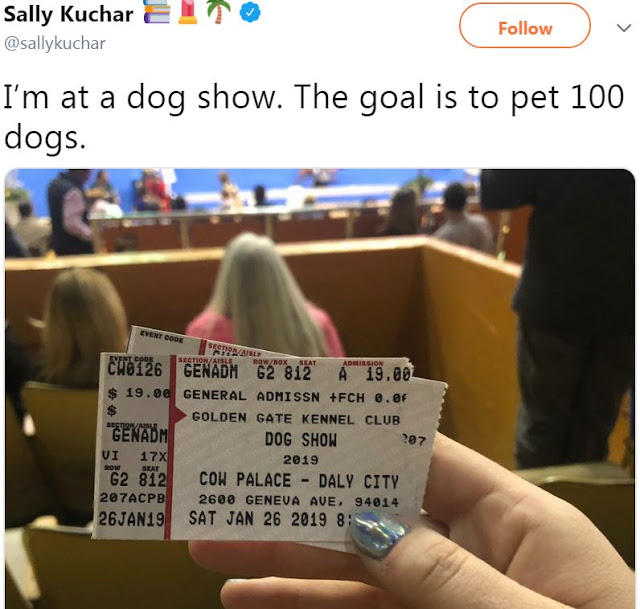 A dog show is already a magical land where dreams come true, but one innovative attendee made a good thing even better.

Sally Kuchar arrived at the Golden Gate Kennel Club Dog Show on Saturday with one goal: Pet 100 dogs. It was an optimal place for such an undertaking. The Golden Gate show is a bench show, which means that the dogs hang on on assigned benches (and are available for meet and greets) while they're not being shown.

"Folks are encouraged to walk around and familiarize themselves with the breeds, and petting is very, very encouraged," Kuchar explained via email.

So Kuchar made the rounds. Throughout the day, she took 100 videos of 100 dogs, each better (or good-er, if you're still into that lingo) than the last.


Kuchar said that although she's been to the Golden Gate show five times before, this is the first time she's taken on the 100 dog challenge. "I like doing public challenges because it holds me accountable," she said.

And for the most part, the dog owners were cool with Kuchar's wholesome project. She only had one weird run-in: "I was having a great conversation with a bulldog's owner and did let her know that I was trying to pet 100 dogs," she said. "She looked at me quizzically and changed the subject."