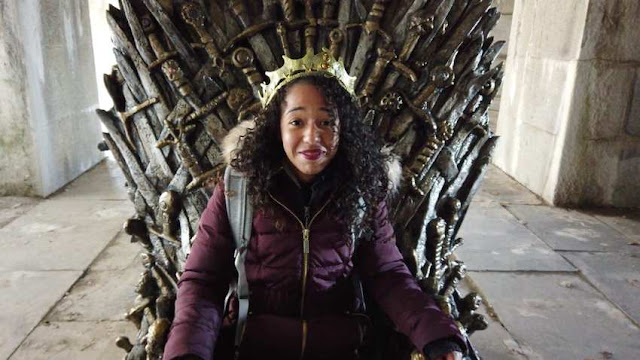 Early Thursday morning, HBO dropped the final clue in its scavenger hunt for seven Iron Thrones hidden in obscure, exotic locations around the world: an hour-long video of a giant, spiky-ass chair plunked down in the middle of what looked like a castle. This was a big one—the only Throne that had yet to be discovered—and, immediately, folks scrambled to try to track it down. Within minutes, fans figured out that it was in Fort Totten, New York, an old military compound-cum-public park in deep Queens. Anyone close enough to actually get to the thing—including yours truly—rushed to become the first to find it. But we were already too late.

Melanie Joaquín saw the video of the Throne as soon as HBO published it, and the moment she laid her eyes on it, she knew where it was. She lives down the street, in an apartment building just outside the park. There was no mistaking that strange cavern, its large stone blocks, the eerie way the light drifted through its columns. The "Throne of the Crypt," she knew, was inside the old Battery at Fort Totten.

She clambered out of her apartment, jumped on a bus to the park, and sprinted towards the Throne, only to find the gates to Fort Totten locked. (The producers and director who set up the Throne, tasked with unlocking the gates, had only just taken their video live. There was "no way," they told me, that anyone could figure out where it was that quickly, much less actually get to it.) But Joaquín was determined.

She found a small, jagged hole in the fence, crawled through it, and ran headlong towards the old Battery, zigzagging through the park and racing down a long, dark tunnel that led to the Throne. There, waiting for her, were a pair of guards: two towering, bearded men in long fur-collared cloaks, leather boots, and 16th-century breastplates. After asking her a few staggeringly intense questions straight out of Game of Thrones itself—"What is your quest? Is it the Throne you seek?"—they guided her to it. And thus, at long last, this gem of a moment was born:

Other aspirant throne-seekers would, in time, come to discover the All-Important Seat themselves, only to find that they had been beaten. Somehow, Joaquín had managed to claim her place atop it about ten minutes after HBO's video went up.

"She got here so quickly. We were in shock," Aramique Krauthammer, the director of the Iron Throne project, told me. "We didn't even know where she came from. I'm still surprised, like—how is this possible?"

Her quest complete, her Throne mounted, and her crown secured, Joaquín left Fort Totten and returned to her home in Queens—only now she bore a new title, bestowed upon her by Game of Thrones itself. Allow me to introduce you, mere mortals, to Melanie Joaquín: the Queen of Queens.