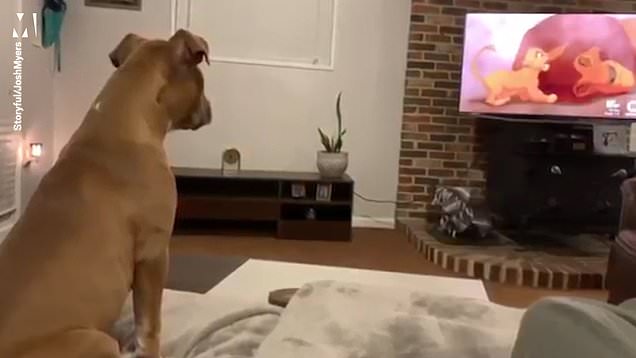 It’s long been thought that dogs have a “sixth sense.” They have abilities that we certainly don’t possess, like having about 50 times as many olfactory receptors as we do, but they also display some human traits, as well.

Part of their human-like behavior is probably a product of decades of nurture, of bonding with people, living with people and learning to work with people. There are some reactions they have that we probably read into more than we should, but there are other times when their behavior just seems so clear.

Luna is a special little pup whose owners say has a great deal of soul. They were watching “The Lion King” recently when they caught an emotional display that warmed their hearts.

“Anything you feel, I can feel too,” Josh Myers wrote on Facebook on Feb. 19. “So Hannah and I were watching the Lion King while Luna played wildly with her toys.”

“But right as Mufasa falls to his death, she stops and turns to the TV to watch. To see her crying at the TV was the sweetest thing I think I’ve ever seen.

“She even lays down right after Simba lays with his dad….We don’t deserve dogs. ? 4 months old and she’s already showing empathy.”

Luna had an interesting start. Just a little over four months ago, a woman who goes by the name Blake Blamalam on Facebook took in a pregnant rescue pit bull. Shortly after bringing her in, the dog — dubbed “Melon” — gave birth to 12 adorable pups.

“I’m so impressed with this little mama,” Blamalam wrote on Oct. 2018. “She couldn’t be sweeter and her babies are the cutest!”

“She is so tired but still so nurturing. Didn’t expect to be fostering a dog that would give birth to 12 puppies in my home but I’m happy to have given her a place she felt safe enough to do so. You can bet I’ll be spoiling this little family while looking for loving homes for them. Mission Fort Tiny Fluffs will be initiated soon.”

Apparently, when the puppies were old enough to be adopted, Josh Myers and Hannah Huddleston saw a post shared by a friend who was helping get the word out about Melon’s adoptable puppies, which is how they ended up with their beloved Luna.

When they posted the video of Luna watching the movie, Blamalam responded saying she was taking after her mother.

“Oh my!” she commented. “Well I did say that her pups were famous ❤️ her mom also responds to the tv, I swear these babies are all going to be rockstars.”


“All thanks to you!” Huddleston replied. “We wouldn’t have Luna if you decided to not bring Melon home. We weren’t actively looking for a pup, just stumbled upon a post that Liza Greever shared. ?”

“Luna says thank you for all the love and support!!” Myers updated fans in a comment on the original video. “She got tons of hugs and kisses after this scene and is much more emotionally stable now hahah. But all this sudden fame has her exhausted ?”