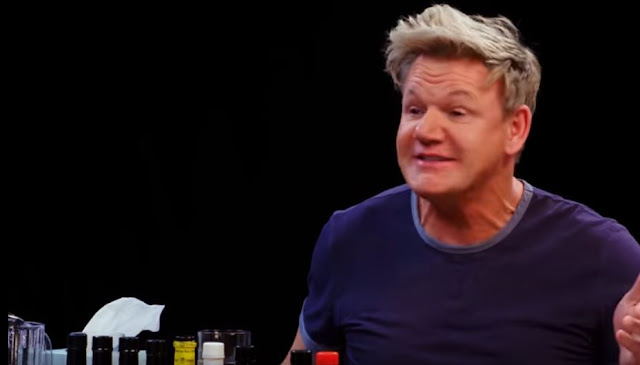 Any time Gordon Ramsay is out of his element, it's a treat to watch, so seeing him completely lose it with a batch of hot wings is nirvana.

Ramsay appeared as a guest on First We Feast's Hot One's, and fans of the YouTube series know that Ramsay is the holy grail of guests. Hot One's has gone through 7 seasons of spicy interviews, and for 7 seasons, the comment section was always littered with, "Get Gordon Ramsay," requests.

It has finally happened, and the biggest takeaway was that Ramsay's spice tolerance is trash. It'd be surprising if he could comfortably tolerate anything spicier than soy sauce.

The show's challenge is to get through 10 wings, each one hotter than the last, and Ramsay was fidgety by the second wing, which had a cute little green turtle on the sauce's bottle.

Probably worst of all, Ramsay ran to the restroom with hot sauce hands, causing a down south burn that no man deserves.

The very next wing was Da Bomb, which Ramsay compared to, "Sticking your tongue in fucking acid."

By the end of it all, Ramsay was in tears, chugging Pepto Bismol, spitting out water, and spraying lime juice directly into his mouth for some reason.

I don't know if I've ever seen a human being so uncomfortable around hot wings, but he still made it all the way through the challenge. Not very well, but he did it.

His reward was teaching host Sean Evans to make scrambled eggs with his mouth on fire.

This video is probably the most entertaining thing in 2019, so far. If you have 31 minutes to spare, do yourself a favor and watch Gordon suffer like he never has before.