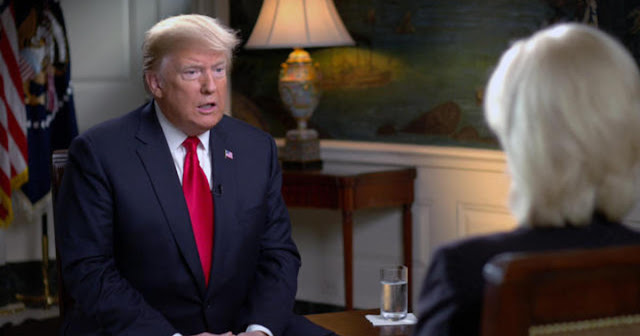 In a seemingly rare instance, Donald Trump was pressed about his views on climate change on Sunday in an interview with 60 Minutes' Lesley Stahl.

Although Trump stepped back from his previous claims that climate change is a hoax, he stopped short of acknowledging that it is a manmade problem, and claimed that global warming will somehow reverse.

"I think something's happening. Something's changing and it'll change back again. I don't think it's a hoax, I think there's probably a difference," he told the program.

. @LesleyRStahl : “Do you still think that climate change is a hoax?”


Stahl told Trump that she wished he "could go to Greenland" and "watch these huge chunks of ice just falling into the ocean, raising the sea levels."

In response, Trump told Stahl, "You don't know whether or not that would have happened with or without man."

Trump's resistance to acknowledge human-induced climate change is at odds with findings made by his own scientists at NASA and NOAA, but the president told the program he has "scientists that disagree with that."

He also accused scientists of having a "political agenda," but didn't elaborate on either of the claims.

The current administration has been hostile to climate policy, as evidenced by the withdrawal from the Paris Agreement last year, and Trump's confusion as to who the I.P.C.C. is when it released its grim report last week.

Trump's interview with the program also touched on the Brett Kavanaugh saga. The president said a speech in which he mocked her testimony helped the Supreme Court nominee get across the line, but Trump denied he was making fun of her.

"Had I not made that speech, we would not have won. I was just saying she didn't seem to know anything," he said. Instead, Trump thought Blasey Ford was "treated with great respect," but didn't answer if he thought she was lying about her accusation of sexual assault against Kavanaugh.

"I'm not gonna get into it because we won. It doesn't matter. We won," he said.