New archaeological evidence suggests humans were cultivating and consuming cacao—the crop from which chocolate is produced—as long as 5,300 years ago, which is 1,500 years earlier than previously thought. What’s more, cacao was initially domesticated in the equatorial regions of South America, and not Central America.

Humans, as a new paper published today in Nature Ecology & Evolution shows, have been consuming chocolate for a very long time.

Theobroma cacao, the plant from which chocolate is produced, was domesticated by Mesoamericans around 5,300 years ago in the Upper Amazonian region of South America, according to the new paper. Prior to this study, archaeological evidence pointed to a Central American origin around 3,900 years ago, so this new research is upending what we know about chocolate, where it came from, and when. 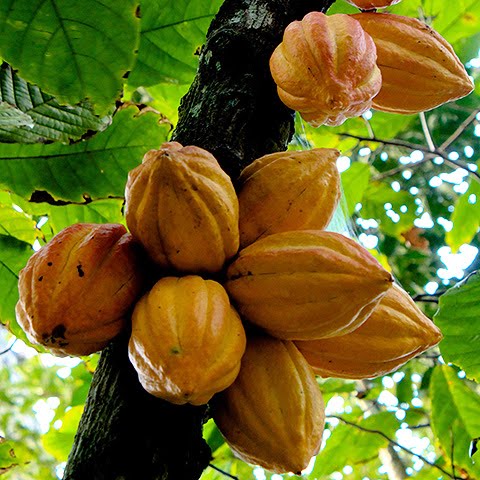 Cacao was hugely important to Mesoamericans prior to the arrival of Europeans. Cacao seeds were dried, ground, and made into a variety of foods and drinks (but not solid chocolate—that wasn’t invented until the 1850s). But there is more to the story of cacao than that, as the study authors, led by Sonia Zarrillo from the University of Calgary, point out in the paper:


Cacao was economically and politically important as the seeds were a key commodity in trade, were used as tribute payment and as currency and cacao was cultivated in large plantations. The various chocolate drinks, and especially the frothy foam created from them, held a prominent role in rituals, feasts and consumption by the elite, and specialized vessels were used in their preparation, storage and serving. Cacao trees, pods, seeds and drinks were also intimately associated with their myths.

Despite the importance of this crop, studies of its domestication and early uses have been limited due to the paucity of archaeological evidence. Scientists estimated an origin around 3,900 years ago in Central America, but emerging lines of evidence in recent years have chipped away at this interpretation. For example, the highest genetic diversity of cacao and its related species are in the equatorial regions of South America; 22 different species of the Theobroma plant and 17 species of its wild relatives, known as Herrania, are native to the Upper Amazon, while only two cultivated species of Theobroma exist north of Costa Rica.

But other clues point to a South American origin as well, as the authors write in the study:


[Historic] sources document dozens of uses for both Theobroma and Herrania in South America, including use of the seeds as medicine and food, the pulp eaten fresh, as a juice or as a fermented alcoholic beverage and the bark and leaves for medicinal extractions and infusions. Importantly, sources also indicate that T. cacao was in cultivation on the Pacific Coast of Ecuador before the arrival of the Spanish. Despite these accounts, and that ancient ceramic vessels from Ecuador and the north coast of Peru include [graphic] representations of cacao pods, no unequivocal direct archaeological evidence for the pre-Columbian use of cacao has hitherto been reported for South America.

Indeed, though the signs hinted at a South American origin, the archaeological evidence simply wasn’t there. This led Zarrillo and her colleagues to search for evidence at the Santa Ana-La Florida site in Ecuador. Located in the Upper Amazon, this is the oldest known site of the Mayo-Chinchipe people, who are known to have inhabited this area 5,450 years ago. Evidence uncovered by Zarillio’s team, which included researchers from the University of British Columbia, the University of California-Davis, and several other institutions, pointed to the use of chocolate among the Mayo-Chinchipe between 5,300 to 2,100 years ago.

Specifically, the researchers found starch grains linked to Theobroma inside pots, along with theobromine residue (a bitter alkaloid) that’s produced by T. cacao but not related wild species. What’s more, they also found bits of ancient DNA linked to T. cacao. With these three independent lines of evidence—starch grains, chemical biomarkers, and DNA sequences—the researchers have scored a hat-trick.

“These three methods combine to definitively identify a plant that is otherwise notoriously difficult to trace in the archaeological record because seeds and other parts quickly degrade in moist and warm tropical environments,” said Zarrillo in a statement.

Michael Blake, a co-author of the study and a researcher from the University of British Columbia, summed up these findings rather clearly in a statement.


This new study shows us that people in the upper reaches of the Amazon basin, extending up into the foothills of the Andes in southeastern Ecuador, were harvesting and consuming cacao that appears to be a close relative of the type of cacao later used in Mexico—and they were doing this 1,500 years earlier. They were also doing so using elaborate pottery that pre-dates the pottery found in Central America and Mexico. This suggests that the use of cacao, probably as a drink, was something that caught on and very likely spread northwards by farmers growing cacao in what is now Colombia and eventually Panama and other parts of Central America and southern Mexico.

This latest study is adds to a growing body of evidence suggesting a South American origin of human-cultivated cacao.