A 5.5 Metre Great White Shark ate a dead Whale in front of a boat full of tourists 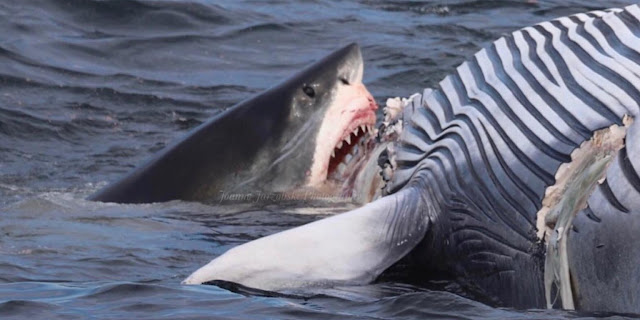 Tourists on a whale-watching cruise were met with the unexpected sight of two great white sharks, one of which was 18 feet long, eating a dead whale.

One hundred and sixty passengers were on the tour in Cape Cod, Massachusetts, on Sunday when they saw the two sharks consuming the fin whale's carcass. Joanne Jarzobski, a marine biologist on the cruise who took photographs of the scene, described what she saw to Business Insider.

"We had received a report in the morning that this whale was floating in the bay and we were asked to try to document it on our way out on our whale watch," she said.


But guests were instead treated to the grisly scene of two sharks feasting on the whale.

The cause of the whale's death is unknown, the cruise company, Hyannis Whale Watcher Cruises, wrote on Facebook.

"While it always saddens us to see a dead whale, the great white sharks are helping to recycle it," the company wrote, along with a photograph of the whale with a chunk of its flesh bitten off.

The whale's throat appears to be covered in deep grooves, which are typical for this type of whale.

Jarzobski said seeing the sharks eating the carcass is a good sign.

"As an important animal in our environment, sharks have gained a notoriously bad reputation, yet sharks are a very good sign of a healthy ecosystem," she said.

"Getting the opportunity to see a great white shark in action is truly a once-in-a-lifetime experience for our passengers and crew."

"It was truly an incredible experience to witness these apex predators recycling the dead finback whale," Jarzobski wrote on Facebook." I'm still in awe!"