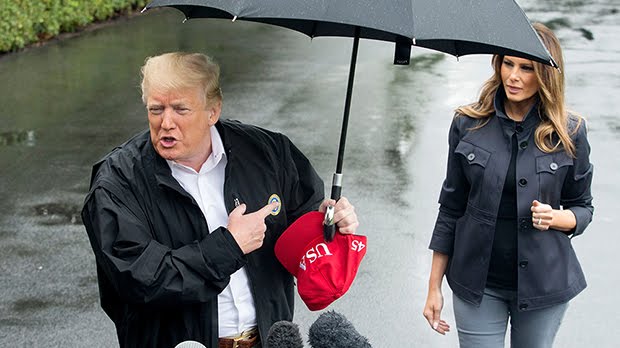 Earlier this year, Donald Trump was caught in a video that quickly went viral, showing the president refusing to share his umbrella with his wife and 12-year-old son. On Monday, TV cameras captured Trump in a similarly thoughtless moment on the White House lawn. As he and his wife, Melania Trump, prepared to board the Marine One helicopter — starting their journey to the Florida panhandle where, Reuters reports, they arrived later Monday — Trump was distracted by reporters en route.

The trip is Trump’s first to the area that was hit by the devastating hurricane. When Hurricane Michael made landfall on October 10, as Inquisitr reported, Trump chose to hold a campaign rally in Erie, Pennsylvania — about 1,000 miles north of the Florida region where the storm was wreaking destruction.

As of Monday morning, the number of confirmed deaths resulting from the hurricane had reached 18 — with dozens of people still unaccounted for, according to a Weather Channel report.

A light rain was falling in Washington D.C. on Monday when Trump and his wife left the White House to begin their trip south to Florida. As seen in the video below, courtesy of ABC News, Trump holds an umbrella over himself as he chats with reporters. But when Melania Trump appears to join him, he makes no move to protect her from the rain with his umbrella.

Instead, Trump walks several steps towards the TV cameras, leaving Melania Trump standing by herself in the rain. When he rejoins her, she moves herself under the umbrella, but he continues to make no move to share it with her.

So nice, Trump and Melania, and he has his umbrella. It‘s a men world. pic.twitter.com/TEzW4OPn6S
— Frank Hensel (@hensel_frank) October 15, 2018

Indeed, in January of this year — during another video that went viral — Trump was seen boarding Air Force One in the rain, holding his own umbrella. His wife and his youngest son, Barron Trump, trailed behind him, getting wet from the rain, as Yahoo! News reported at the time.

“Donald Trump has never been known for his chivalry nor valiance, an assertion compounded by recent pictures showing him hogging an umbrella while his wife and son are rained on,” wrote Harper’s Bazaar at the time of this earlier incident.

The Twitter account belonging to @NowThis had earlier posted a video contrasting Trump’s selfish umbrella use with the willingness of his predecessor, former President Barack Obama, to let others use his umbrella.

The way Trump and Obama use an umbrella tells you everything about them pic.twitter.com/rLjiHwIKyc
— NowThis (@nowthisnews) June 5, 2018