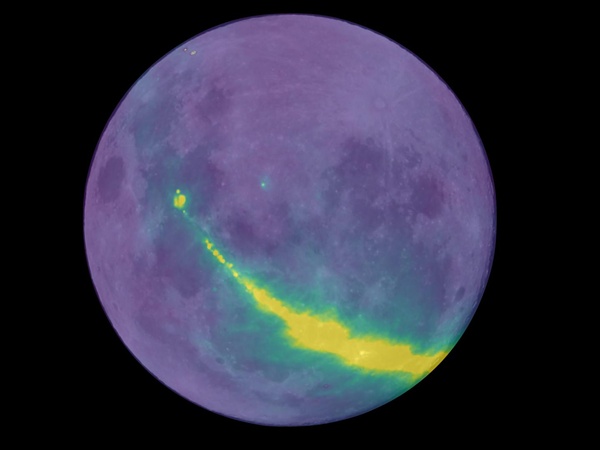 The entire time the Moon has been sitting up there, quietly orbiting Earth, it turns out it's actually been doing something incredible. Something that could help teach us about the early Universe.

Off its rocky surface, the Moon reflects radio waves emitted by our home galaxy, the Milky Way. And now astronomers have detected them.

The signal was picked up by researchers from the Curtin University node of the International Centre for Radio Astronomy Research (ICRAR) and the ARC Centre of Excellence for All Sky Astrophysics in 3 Dimensions (ASTRO 3D). But even though that's cool enough, it's not the end goal.

Their target is something much more elusive: they want to detect the extremely faint signal emanating from the hydrogen in the very earliest days of the Universe, in the time between the Big Bang and the Epoch of Reionisation (EoR), when the Universe's lights switched on.

"Before there were stars and galaxies, the Universe was pretty much just hydrogen, floating around in space," said astronomer Benjamin McKinley.

"Since there are no sources of the optical light visible to our eyes, this early stage of the Universe is known as the 'cosmic dark ages'."

The instrument the team are using is a low-frequency radio telescope called the Murchison Widefield Array (MWA), in the desert of Western Australia. Consisting of 2,048 dipole antennas, it's one of the best tools in the world for trying to understand the early Universe.

Its low frequency range of 80-300 MHz, astronomers hope, will be able to detect the radio signal emanating from the hydrogen atoms prior to the EoR.

"If we can detect this radio signal it will tell us whether our theories about the evolution of the Universe are correct," McKinley noted.

But that signal is incredibly faint, especially compared to all the other radio signals that have since filled the Universe.

One possible solution is to measure the average brightness of the radio sky - but this can't be done using standard techniques, since interferometers aren't sensitive to a global average that doesn't vary.

So this is where the Moon comes in. Radio waves can't actually pass through the Moon - which is the reason why it's difficult to communicate with astronauts on the Moon's far side, and also why scientists think it would be an amazing idea to put a radio telescope back there, where it wouldn't encounter interference from terrestrial radio emissions.

The flip side of that is that the Moon occults the radio sky behind it. So the research team leveraged this property to measure the average brightness of the patch of sky surrounding it.

This is not a new idea, but the team also employed a more sophisticated method of dealing with 'earthshine', the radio emissions from Earth that bounce off the Moon and interfere with the signal received by the telescope.

Then, after calculating earthshine, they also had to establish how much interference was being caused by the galaxy itself.

To create the incredible image of the Milky Way's galactic plane reflected off the Moon, the team put together data sets. The first was the MWA's lunar observations. The second was a Global Sky Model - a map of diffuse galactic radio emission - published in 2008.

Using ray-tracing and computer modeling, they were able to map the Global Sky Model onto the face of the Moon, and work out the average radio brightness of the galaxy's reflected radio waves.

So, yes - that's a generated image, not an exact representation of the MWA data, which you can see in the picture below. The dark patch in the middle is the Moon. 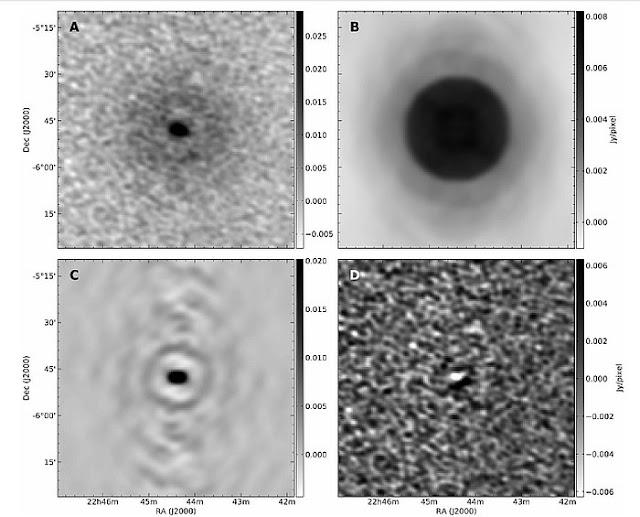 So did they detect the EoR? Well, not yet. This research was early groundwork to establish the efficacy of the technique. And it's looking pretty good so far.

"Our initial results using the lunar occultation technique are promising. We are beginning to understand the errors and spectral features present in our data and will continue to refine our techniques," the researchers wrote in their paper, but they noted there's much more work ahead.

"Future progress depends upon processing more data and further refining our techniques to effectively model foreground and reflected emission within our frequency range. The reflective behaviour of the Moon at low frequencies is not well studied and this will require particular attention. We must also develop techniques to break the degeneracy between the sky temperature and the Moon temperature in our fitting procedure."