Nike Loses $3.75 Billion in Market Cap After Colin Kaepernick Named Face of ‘Just Do It’ Ads 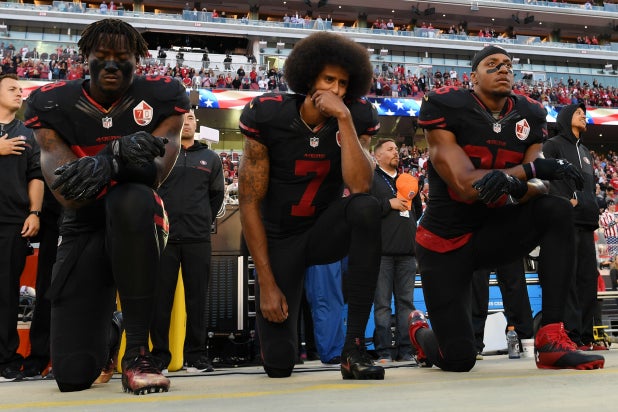 Nike just lost about $3.75 billion in market cap after announcing free agent NFL quarterback Colin Kaepernick as the new face of its “Just Do It” ad campaign. It’s the 30th anniversary of the iconic TV and print spots.

At the time of this writing, the sneaker company’s intra-day market capitalization was $127.82 billion. On Friday, that number had been $131.57 billion.

Market capitalization is the market value of a publicly traded company’s outstanding shares.

Shares of NKE stock dropped about 4 percent on Tuesday morning, as #NikeBoycott has been trending on Twitter. The company’s valuation has since recovered a bit.

We chose a 5-day snapshot of NKE stock so viewers can see the fall comparing Labor Day Weekend’s “before” and “after”:

“Believe in something, even if it means sacrificing everything. #JustDoIt,” Kaepernick tweeted on Labor Day, echoing the words of the ad.

Believe in something, even if it means sacrificing everything. #JustDoIt pic.twitter.com/SRWkMIDdaO
— Colin Kaepernick (@Kaepernick7) September 3, 2018


Despite not playing a professional down of football since 2016, Kaepernick has remained a Nike athlete as the company continued to pay him, according to ESPN reporter Darren Rovell.

The ad hits on the protests Kaepernick started in 2016, when he began kneeling during the National Anthem before NFL games as a means of raising awareness and protesting racial inequality in America, and the shooting deaths of unarmed black men, women and children by police officers.

The number of NFL players taking up the protest and kneeling during the anthem has dwindled as the league has attempted to curtail the issue.

The protests created a firestorm in the media and among football fans. President Donald Trump made the protests one of his main issues on Twitter, saying that players who kneel during the national anthem should be fired.

Kaepernick, who led the 49ers to the Super Bowl in 2013, brought a lawsuit against the NFL, accusing the league of colluding to keep him from being signed by any NFL team. Last week a court issued him a preliminary win in his case, essentially granting a full hearing on the dispute, according to The New York Times, despite the NFL’s efforts to sweep the issue under the rug.