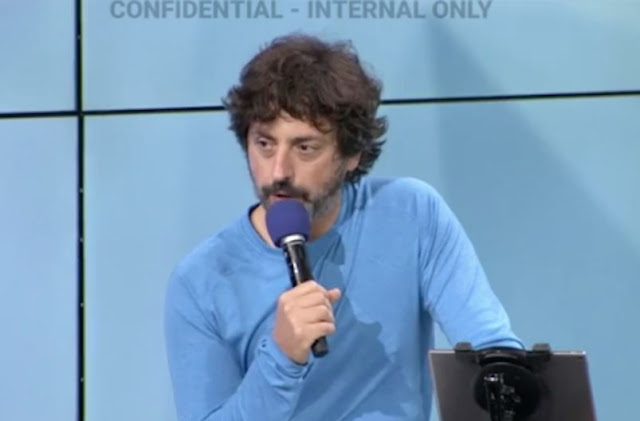 “I know many of you do too,” he said around the two-minute mark, adding that Trump’s victory “conflicts with our values.”

“So many people apparently don’t share the values we have,” he said.

Senior VP for Global Affairs Kent Walker assured his employees that “history is on our side,” close to the 10-minute mark of the footage.

Google CFO Ruth Porat visibly chokes back tears when talking about the night Hillary Clinton lost the election, at about the 13:30-minute mark. She also told everyone in attendance to give the person next to them a hug at the 16:50-minute mark.

During the question and answer period, a man asks what Google is going to do about “low-information voters” sharing “misinformation” and “fake news,” to which CEO Sundar Pichai says that “investments in machine learning and AI” are the way to fix the problem.

The release of the video footage comes days after Fox News’s Tucker Carlson reported on leaked e-mails showing the company’s efforts to get out the vote among Hispanic Americans, believing that their efforts would benefit Hillary Clinton.

Google sent the following statement to Breitbart after the footage was published.

At a regularly scheduled all hands meeting, some Google employees and executives expressed their own personal views in the aftermath of a long and divisive election season. For over 20 years, everyone at Google has been able to freely express their opinions at these meetings. Nothing was said at that meeting, or any other meeting, to suggest that any political bias ever influences the way we build or operate our products. To the contrary, our products are built for everyone, and we design them with extraordinary care to be a trustworthy source of information for everyone, without regard to political viewpoint.